Luxurious Apartments in the Heart of Central Kolkata

The location of Alcove Gloria at 403/1, Dakshindari Road, is flanked on all sides by important conveyance availing points, shopping malls, schools, colleges, restaurants, offices, and also not far is the famed Sreebhumi Durga Puja Pandal. The premium location remains abuzz with plenty of happenings all around, yet for the Alcove Gloria residents, it is a peaceful abode.

The Belgachia Metro station and Ultadanga railway station being near, the prime business hubs of the city from Park Street to Salt Lake and beyond are within easy reach for the residents. Frequent flyers reach the NSC Bose International airport in 20 odd minutes from Alcove Gloria by the VIP road. Should one be looking for facilities without venturing far from Alcove Gloria, then the 70,000 sq. ft hypermarket suffices well. The Sreebhumi BIG BAZAAR at the commercial and retail block of Alcove Gloria readily supplies the everyday needs for Gloria residents and locals. Alcove Gloria, having the tallest towers on VIP road now serves as an important piece of landmark. The successfully sold out project from Alcove Realty stands today as a symbol of quality planning and masterful execution at one of the most prized locations of the City of Joy. 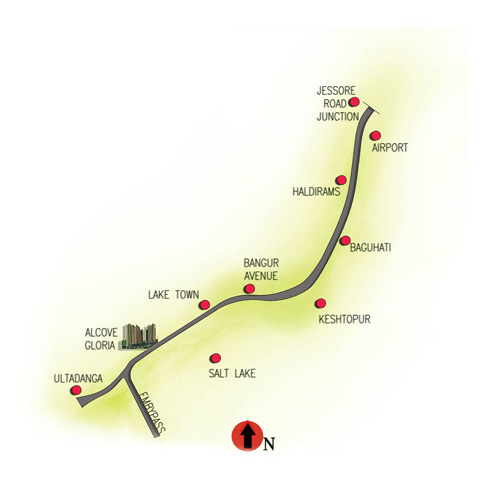